Lester Grinspoon Reconsidered: Celebrating a Pioneer of Drug Policy and a Legacy of Social Change 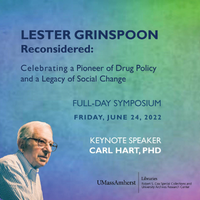 Lester Grinspoon Reconsidered: Celebrating a Pioneer of Drug Policy and a Legacy of Social Change In-Person

For more information, including bios of the participants, and to register, please visit the symposium website.

Join us for a day-long symposium honoring Lester Grinspoon, the Harvard psychiatrist who became a celebrated advocate for reforming marijuana prohibition laws and for recognizing marijuana’s potential benefits both medicinal and recreational. Hosted by the Robert S. Cox Special Collections and University Archives Research Center (SCUA) and the UMass Amherst Libraries, it brings together experts and activists who knew Grinspoon or were inspired by his work and culminates in a keynote address from Carl Hart, the renowned psychologist and neuroscientist and author of works both scientific and popular, including Drug Use for Grown-Ups: Chasing Liberty in the Land of Fear.

Lester Grinspoon, M.D., (June 24, 1928 - June 25, 2020) was born in Newton, Mass., served in the Merchant Marines, and graduated from Tufts University and Harvard Medical School. He trained at the Boston Psychoanalytic Institute but later turned away from psychoanalysis. He spent 40 years as a senior psychiatrist at the Massachusetts Mental Health Center and was an associate professor of psychiatry at Harvard, where he co-founded and edited the Harvard Mental Health Letter. In the mid-1960s, struck by the rising popularity of marijuana and its reputed dangers, Grinspoon began to examine the medical and scientific literature about marijuana usage. To his surprise, he found no evidence to support claims of marijuana’s harmful effects, and his resulting 1969 Scientific American article drew wide attention. His research ultimately convinced him of marijuana’s benefits, including enhanced creativity and medicinal uses; his interest took a deeply personal turn when his young son, undergoing treatment for the leukemia that eventually took his life, found that marijuana eased his severe nausea.

Grinspoon served on the board of NORML; testified as an expert witness in some high-profile court cases; and published numerous influential articles and books including Marihuana Reconsidered (1971) and Marihuana: The Forbidden Medicine (1993; with James B. Bakalar). He also wrote or cowrote books on schizophrenia—an early research interest—psychiatric drugs, cocaine, and amphetamines and was an early prescriber of lithium for bipolar disorder, and he was a dedicated antinuclear activist. More information on the Lester Grinspoon Papers, donated by Grinspoon in 2013, can be found on the SCUA website.

SCUA’s collections on drug policy also include the National Organization for the Reform of Marijuana Laws (NORML) Records, the Marijuana Policy Project Records, the Massachusetts Cannabis Reform Coalition (MassCann) Records, and others, and they continue to grow.

Carl Hart, Ph.D., is the Ziff Professor of Psychology in the Departments of Psychology and Psychiatry at Columbia University. Professor Hart earned his Ph.D. from the University of Wyoming and has published numerous scientific and popular articles on neuropsychopharmacology. His books include the textbook Drugs, Society and Human Behavior (with Charles Ksir); High Price: A Neuroscientist’s Journey of Self-Discovery that Challenges Everything You Know About Drugs and Society, which won the 2014 PEN/E.O. Wilson Literary Science Writing Award; and, most recently, the acclaimed Drug Use for Grown-Ups: Chasing Liberty in the Land of Fear. Professor Hart has appeared on podcasts, radio, and television shows, and in documentary films including the award-winning The House I Live In. For more information, see his website.