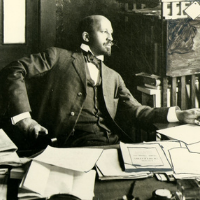 A virtual panel discussion from the W. E. B. Du Bois Center at the University of Massachusetts, Amherst, exploring the Du Boises’ lived experience of government repression and surveillance in the United States as well as the scholarship both produced on this topic. We will also address contemporary scholarship about the surveillance state both past and present, demonstrating the continued importance of the Du Boises’ dual legacies of peace and justice activism.

Dr. Charisse Burden-Stelly: the 2020-2021 Visiting Scholar in the Race and Capitalism Project at the University of Chicago. Assistant Professor of Africana Studies and Political Science at Carleton College.

Co-author, with Dr. Gerald Horne, of W.E.B. Du Bois: A Life in American History. She is currently working on a book titled Black Scare/Red Scare: Antiblackness, Anticommunism, and the Rise of Capitalism in the United States. With Dr. Jodi Dean she is co-editor of the forthcoming volume Triple Jeopardy and World Revolution: Three Decades of Political Writing by Black Women Communists. She is the guest editor of the “Claudia Jones: Foremother of World Revolution” special issue of The Journal of Intersectionality, and her published work appears in journals including Small Axe, Souls, Du Bois Review, Socialism & Democracy, International Journal of Africana Studies, and the CLR James Journal. Follow her on Twitter @blackleftaf.

Dr. Le’Trice D. Donaldson: Assistant Professor of African American and U.S. history at the University of Wisconsin-Stout. She specializes in African American military and gender history during the Post-Civil War era through World War I.

Dr. Donaldson runs a blog titled The Blerdy Report and is the author of A Voyage Through the African American Experience, a textbook for the introduction to African American Studies. In 2020, Southern Illinois University Press published her monograph Duty Beyond the Battlefield: African American Soldiers Fight for Racial Uplift, Citizenship, and Manhood, 1870-1920. Follow her on Twitter @eboninerd.

Dr. Ashley D. Farmer: Assistant Professor in the Departments of History and African and African Diaspora Studies at the University of Texas at Austin.

Author of Remaking Black Power: How Black Women Transformed an Era and a co-editor of New Perspectives on the Black Intellectual Tradition. Dr. Farmer’s scholarship has appeared in numerous venues including The Black Scholar and The Journal of African American History. Her research has also been featured in several popular outlets including The Washington Post. Her current projects are: Queen Mother Audley Moore: Mother of Black Nationalism and Gendering Surveillance: Black Women and COINTELPRO. Follow her on Twitter @drashleyfarmer.

Dr. Phillip Luke Sinitiere: teaches history and humanities at the College of Biblical Studies, a predominately African American school located in Houston’s Mahatma Gandhi District. He is also the Scholar in Residence at the Du Bois Center at the University of Massachusetts.