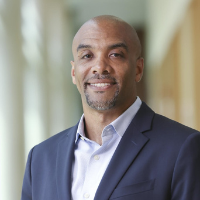 For nearly two decades, W. E. B. Du Bois attempted to write what he believed would be the definitive history of the African American experience in World War I. In this talk, Chad Williams explores Du Bois’s complex relationship with the history and legacy of World War I and what it reveals about the struggle for democracy, racial justice and peace in the 20th century.

Williams has earned prestigious fellowships from the Radcliffe Institute for Advanced Study at Harvard University, the American Council of Learned Societies, the Schomburg Center for Research in Black Culture, the Ford Foundation and the Institute for Citizens and Scholars.

Williams has published articles and book reviews in numerous leading academic journals and collections, as well as op-eds and essays in The Atlantic, The Washington Post, Time, and The Conversation. He has provided historical commentary for numerous television series, including The Great War (2018), Reconstruction: American After the Civil War (2019), The American Presidency with Bill Clinton (2022), and Black Patriots: Buffalo Soldiers (2022).

The Washington Post: The Buffalo shooting exposes how history shapes the present
The Conversation: As a patriot and Black man, Colin Powell embodied the ‘twoness’ of the African American experience
The Atlantic: Du Bois Gave Voice to Pain and Promise